Happy Birthday to Eat Like a Girl: TEN today!

Eat Like a Girl is 10 today. TEN! Woah, happy birthday to you, little thing!

10 years ago, at about this time, I was sitting at my (very messy) office desk feeling overwhelmed. It was towering with notebooks and papers relating to the science publishing projects that I was working on (I studied science at degree level and then technology for my masters). I worked late, and to relax I cooked when I got home. Many evenings and weekends would be spent exploring food shops from far off lands and bringing home ingredients that I hoped google would help me understand or one of my many cookbooks which I had been hoarding for years.

(there was punctuation, I swear!)

I have always been a cook more than anything, as much as I love to eat out now. I didn’t eat out much when I first moved to London, I didn’t have much money after the bills were paid, but I did cook, and I looked at restaurant menus all the time, taking inspiration from them to my kitchen back home. I was obsessed with travel, and travelled when I could (rarely), taking inspiration from those trips back home to my kitchen also.

I loved all of this, but I wanted to do more. My job was going well but I wasn’t satisfied, I wanted to be more creative. I had wanted to start a blog for a few years but underneath all of my gregariousness I was shy and nervous, and I was lacking in confidence. Sure, I had written essays about gonorrhoea and ion channels as I studied my degree in science, but something emotional and personal and public was a lot more terrifying.

I loved photography too. I had done since I was a young child. My mother bought me a little film camera when I was very young, and that started me off. I would get another a few years later and some digital ones along the way. In 2005, I started posting my photos on flickr, a photo sharing website which was new and which was gaining traction. I posted photos of my food, then recipes, participating in community groups, learning, hungry for the joy of it, the experiences and the knowledge. I was inspired and I was learning, I wanted to share. I had been scrambling for a name for months, longer. I bounced ideas off a colleague and some friends but I was never satisfied. In discussion with a friend, Eat Like a Girl grabbed me one day and I knew that was the one.

Celebrating my birthday in Borneo, while there for work (aka writing!)

After one bad day in the office 10 years ago, the detail of which I can’t recall, only feeling that that was it, I was done, I needed something more. So I started my blog, anonymously and with low expectations. There were very few blogs around then at all. I started that evening at home. A basic site, a naive and optimistic “Hello, World” post, a header image of a photo of strawberries, and the next day I posted my first recipe. Fittingly enough, it was a pasta dish. I sat at my little desk, half way down my old hallway in Kilburn, and I wrote and I wrote. I had always loved to write, as a child, teenager and now adult. As before I rediscovered that writing took me away from everything, just for a little while.

That first post was hilariously short (see above), like a post it, as were some of the ones that followed, but that is how it was then. Twitter had just started and there was really no such thing as microblogging yet. We microblogged on our blogs, everything was on there.

One of my early recipes :D

It has been quite the 10 years. I have travelled to amazing places (Peru, Japan, Australia, Canada, Argentina), some more familiar but no less wonderful (Spain, Italy, France). I have met some of my food heroes, a highlight was lunch with Claudia Roden cooked by her at her home. I had a market stall in Covent Garden where I sold my own food crafted from my own recipes for 6 months. 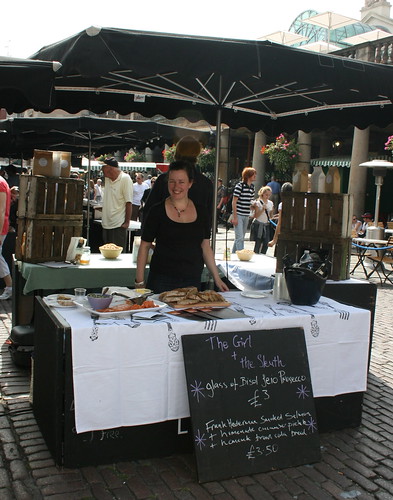 I have cooked pop up dinners in many London locations (including a Christmas lunch at Black’s Members Club) and at home in Ireland (one memorable pop up dinner at the Waterford Festival of Food stands out), I had a brunch café at Electric Picnic (Ireland’s Glastonbury) where I made brunch based on the recipes from the brunch chapter of my cookbook, Comfort & Spice. It was intense and amazing, and I was awarded most hard working chef at the festival (I hardly slept after The Irish Times declared us the best brunch on site!).

It seems obvious now that I would do what I have done. I loved to write, always had my camera, and I was so interested in food. I was always sharing recipes and my new found knowledge with friends and anyone else that would listen. I would spend my childhood learning from my aunt and poring over cookbooks and recipe cards. I loved to cook too. In childhood mainly only cakes and sweets, as an adult I became a much more savoury cook. Cooking brought me peace and calm.

Preview of my cookbook in Sainsbury’s Magazine

I could not have forecast where this blog would have taken me, or the opportunities that it would bring. I am grateful for everyone and all the support and encouragement along the way. 10 years of writing and sharing here, one cookbook, a second one soon to come (the second that I took on board myself in the same naive fashion, but nearly there) and an award from the Observer Food Monthly for the Best Food Blog as well as being shortlisted by the Guild of Food Writers for another. I was shortlisted for the Red Magazine Hot Women Awards twice (hot in terms of what you do, natch!), even listed as one of the most influential people in food in the UK for a time. I speak regularly about blogging and food (I spoke about all of this and more at Facebook in Dublin on International Women’s Day earlier this year, I speak regularly at The Guardian, I am speaking at Soho House tomorrow morning too). I have met some amazing people who inspire me, I have learned so much about food, the world, and myself. Bigger than all of that, I now live my life as a writer and traveller. Everything I could have hoped for, and more.

Where does this leave me now? I feel like I am only starting, 10 years in. I feel grateful for everyone who helped and supported me, and to all of my readers, those who follow my cooking and travelling adventures on snapchat (such fun over there!), my photos on instagram and my occasional rants on twitter.

Thank you. Follow your heart and let your dreams shape you. It won’t always be easy but you will get there. I am still making my way too.

A little dip into the most popular posts in the archive now – forgive the photography from the early days! :D

Most Popular Travel Posts on Eat Like a Girl

Dispatches from Abruzzo, Italy: Cooking with the Grandmothers of Abruzzo and Where to Eat

Melbourne Eating: 9 Restaurants You Must Eat At in Melbourne

Great Train Journeys: Over the Canadian Rockies from Banff to Vancouver on the Rocky Mountaineer

Eating Osaka: Okonomiyaki, the pain of finding it and the joy of eating it

Where to Eat and Drink Like a Local in Bologna